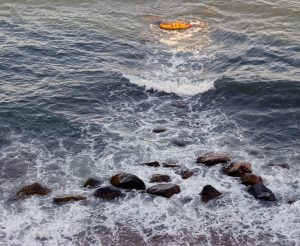 Global Justice Ecology Project and the ¡Buen Vivir! Gallery invite you to our annual winter Solstice Party.  This is also the closing reception of the gallery exhibit The End of the Game, The Last Words from Paradise – Revisited.

This year the party and closing reception take place on Thursday, December 17th from 6-9 p.m. at the ¡Buen Vivir! Gallery at 148 Elmwood Avenue in Buffalo.

Gallery Director Orin Langelle and GJEP Executive Director Anne Petermann will give brief presentations at 7 p.m. about the mission of the gallery and GJEP including ways you can get involved.

There will be music, wine, hors d’oeuvres, and we will celebrate the Solstice and the return of longer days.

We also hope to have some exciting news to share about a new venue for Orin Langelle’s historic exhibit: The End of the Game – The Last Word from Paradise, Revisited. If you haven’t seen it yet, this will be your last chance to see it in Buffalo…

Truman Capote with Peter Beard at Studio 54 during Beard’s 40th birthday party. This photo by Orin Langelle was published in the Adventures and Misadventures of Peter Beard in Africa, by Jon Bowmaster (1993)

Event is Free and Open to the Public. Casual dress.